I hope this finds you and yours well.  The following is a little bit of “family tree” materials that you may find interesting.  You along with 5 others (Rob, Donna, Jeff, Michael, Millie and Brian) have been sent the enclosed black and white photo canvas made from a very old snapshot.  (also enclosed is a color photo canvas of them all together as adults) Chances are that you may have never seen the black and white picture that the photo canvas has been made from.   I have a high level of confidence that your mother appears in the black and white photo, along with her 2 sisters, her 2 brothers and an unknown girl.

I found these photos in 1 of the many boxes that contain hundreds of pictures and slides that I have either taken or that I obtained that belonged to my mother.

Unfortunately, there is very little information available about the black and white picture since there is no writing on the back of it.  If, by chance, you do know any details about this photo, please share.

I have made some guesses about who is in the picture and when it was taken.  How?  By using an image of the 1940 Census record then by looking at the photo, I have proposed the id’s as indicated later in this document.   I realize the possibility that the identifications may not be accurate.  My guess is that it was taken in either 1940 or 1941 at the location listed on the census image which is the “infamous” 801 Merchant Street in Fairmont.  Note the ages listed for our family match up with the birth dates that I am aware of for Granny in 1913, Aunt Pat in 1936 and my Mom in 1938.  (My Mom would have still been 1 in the spring of 1940 when the census was taken?, and then turned 2 in August) That house at 801 Merchant Street is no longer standing and is a vacant grassy lot near the river.

About the above:   Notice that in 1940 Mildred was 27 years old and was considered the head of the household.   Note that 9 people lived at 801 Merchant Street and that in addition to her own 5 children, Mildred aka “Granny” lived with her mother Lillian Wells and her brother Eugene Wells.  Last but not least was a “lodger” William Taylor ?  Perhaps William rented a room to supplement the family income?.  Recall at that time the country was still recovering from the severe economic crises of the 1929 stock market crash (aka Depression) and it would be another year later when the United States would enter World War II following the attack on Pearl Harbor in December of 1941.

Again making assumptions/guesses on ages, identities and when photo was taken.   Some logic included knowing how far apart they are in age and the size of their appearance in the photo.   I know that Mildred (Granny) had 2 other children who died when they were very small.   I vaguely recall that being mentioned at some point, but would tend to doubt that the unknown girl is one of them??  Perhaps a neighbor, cousin, etc.?

Why did I send you these?   I thought that, perhaps, you would like to have them.   The photos really spoke to my heart and led to a great deal of thinking about them, especially the realization of how very, very difficult life was for them at that time.  While the black and white photo was taken 82 years ago, the poverty that I see portrayed in the photo still exists in Fairmont and all of West Virginia.    West Virginia is among the leaders of all states in many categories related to poverty and the associated problems.  Example:  Overdose deaths per 100,000 is #1, obesity, heart disease etc.

Since 2019, I have been visiting Fairmont and that part of West Virginia regularly as I help organize, promote and time running races, I also volunteer for a couple of organizations including Marion County Senior Citizens.  (I maintain their Facebook and website)   www.MarionSeniors.org

Another one of the organizations that I volunteer for is the Union Rescue Mission of Fairmont, a faith-based institution that is just on the other side of the Monongahela River from 801 Merchant Street.  I have promoted and timed a 5K race for them for 2 years.  Here is a link to the event web page that I created for the Mission’s “Run For Recovery 5K Run”.   When you have a moment check out the video that I made that is on the page.    www.RunForRecovery.run

The Mission provides meals for anyone off the street 7 days a week as well as providing housing for the homeless and counseling for those struggling with addiction.   The Mission did play a role in the lives of our mothers (and their brothers?) when they were children in that they provided them some activities and services.  As I recall this photo came my way via Aunt Joan through my Mom?   Once again anything I write about the photo is subject to verification by someone who has more information about it.    I do believe this was taken outside the Union Mission at some sort of “Vacation Bible School? or other such event in July 1947.   The id’s made in the photo are mine and not verified. 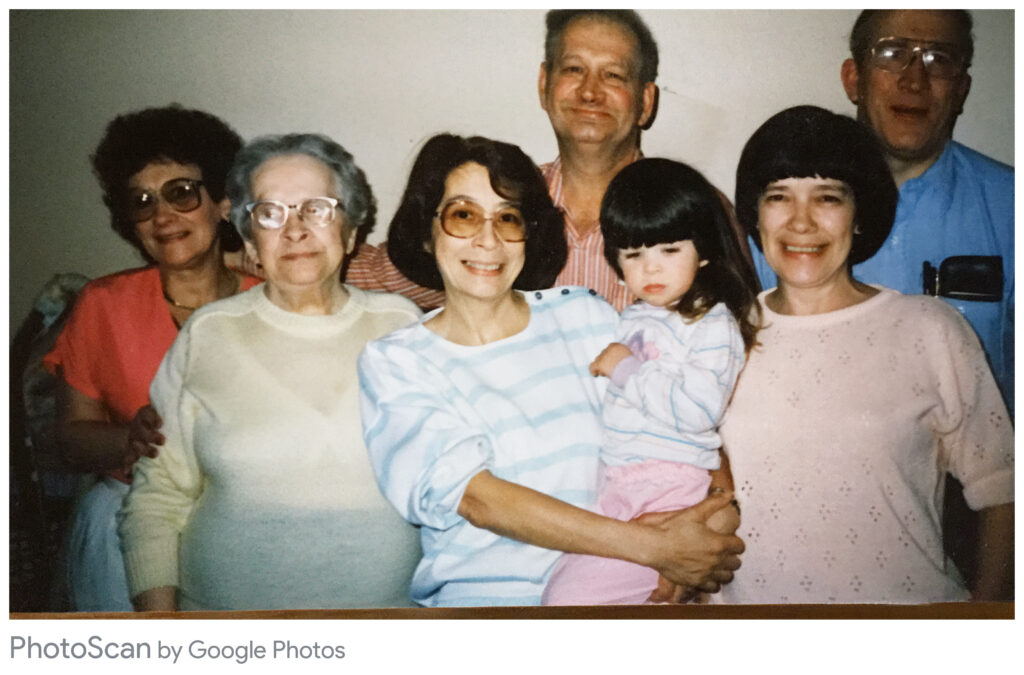 About the color photo canvas:  I am unsure of the date of the photo, but since Sarah is pictured perhaps Millie can provide an estimate of what year it was based on Sarah’s birthdate and her age (2-3?) at the time.  Unfortunately, that photo canvas did not come out as well as I hope it would when I attempted to give it the same background as the black and white photo canvas, but at least you will have something to show to your children and/or grandchildren.  I ask that if your kids or your grandchildren are not familiar with the roots of your mother’s side of your family, consider using the photo canvases to start a conversation and share memories you have of those who appear in either of the pictures.

I pass these photos on to you as my way of honoring the memory of my mother and her siblings.  While I know that while we won’t forget them and what they did for us, subsequent generations of those who have descended from them may not know of them at all.    While I don’t have kids to share these with, I do, as of September 10th, have a wife to share them with, her name is Rebecca (Becki) and maybe someday you can meet her!  My 16 years of bachelorhood came to an end in the most wonderful way!  If you do Facebook, you can see the wedding still pictures at  https://www.facebook.com/100010261594700/videos/702278541199387 or YouTube at

Sadly, I cannot confirm if Uncle Clyde (Harry Miller) is alive or not.  Again, based on the census record, if he is alive, he would be 91ish.    I cannot locate an obituary or a phone number.  I did send a letter to 1319 Speedway, his last known address, seeking information about him but did not get a response.   Realistically given that he was the eldest child, more than likely he has passed away some time ago.   Anyone know?  Recall that he had 4 children, (Harry aka “Brother”, Edna Lou, Jim and Randy).   Uncle Bob (George Robert Miller) to my knowledge did not have any children.

No disrespect for the paternal sides of your families but the maternal side is the one that I have most memories and photos of.   😊

I purchased a new “fast” scanner and have intentions of sorting through all the old photos of the family and digitizing them over the winter.  From time to time, I will post albums on Google photos and let you all know they are available should you wish to see them.  I have established a web page where this and other document photos and links can be found.

Have a great Christmas and New Year!